Ripple is a highly interactive art project located in the virtual world of Second Life. It can be found high above the Tabula Rasa sim, and may be visited by following this link.
--------------------------------------
Ripple is composed of approximately 600 primitive objects orderly arranged in an architectural fashion which are coated in moving video; video that changes in a fluid, rippling fashion in response to the visitor's touch, accompanied by a wave of specially crafted audio. 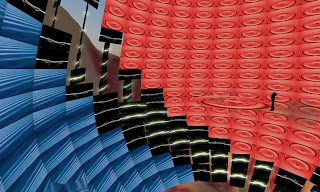 This array of objects is enfolded by a faux landscape composed of interlocking sculpted megaprims which Desdemona created from data derived from a scale model which Douglas made. 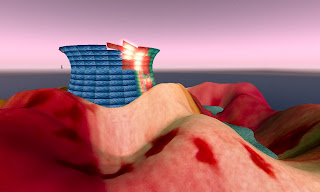 The visitor starts standing before a panel. 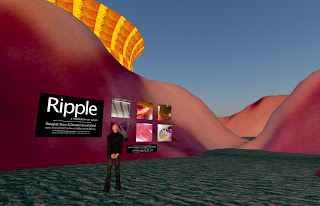 Touching one of the six panels that show macro images of flowers (and one feather) will instantly change the look of the entire landscape. Fun!

The visitor should make sure that audio is turned up to appreciate our collaborator's sonic environment. As you walk through the landscape, note how the sonic environment shifts and changes as you move through it. Once inside the big chamber, start your media stream (not music, but media.) 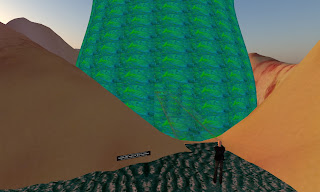 The video is stock footage of all manner of waves: ripples on water, the blood pumping in the body, the light waves of photons, the rippling reaction of a school of fish, colliding galaxies, and of course a hippie's lava lamp. Touch the outside of the chamber and see the reaction. More fun.

The video is stock footage composited by Douglas using After Effects.

Once inside, you'll see a control panel on the platform. 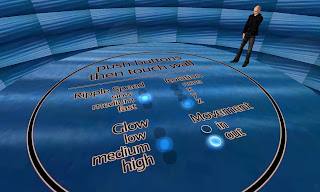 When I was adjusting the parameters of the ripple that runs through the chamber's prims, I was having so much fun playing with the different settings that I decided to share the joy with our visitors. Touch the buttons to change how the ripple behaves, then touch the walls again. Listen - you can hear March's wonderful sounds sweeping around you, emanating from each prim as it moves and changes.

It's also fun to move your camera outside of the chamber and/or moving to a straight-down view. If you click in two places at nearly the same time, note how Desdemona's scripts allow the ripples to pass through one another. And then try clicking in a lot of places very quickly and watch the madness. Whee! 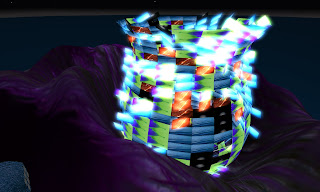